Discover a life free of Abundance Blocks. You can most certainly benefit from THIS

Just a reminder of something really important.

The universe wants you to be abundant.

You were designed to attract money and success.

And the only thing that’s stopping you from doing that right now.

Just like 99% of people on the planet, your energy may be blocked.

And until you do something about it, your energy will remain blocked.

Which is why it’s so important that you experience this: A free energy clearing session with Christie Marie Sheldon >>

In this Masterclass, Christie will tap into your personal energy field and remove a particular Abundance Block that’s keeping you from attracting the life you truly desire. If you’ve ever felt stuck or unsatisfied with your finances, or in your career, or in your manifesting ability…

There’s a high chance you’re suffering from an Abundance Block.

The block could be a subtle belief teachers gave you, like “hard work is the only path to success”. It could be a meme induced by the media, like “the economy is going down the drain and we’re all screwed”.

Or it could even be a seemingly innocent thought implanted by your parents, like “rich people are evil”.

There are 24 different Abundance Blocks – and each person is affected by at least one of them. But the Block Christie will tackle during the masterclass, is by far one of the most common and damaging ones.

And once it’s removed, you’ll see massive and instant improvements in your finances, career, and life as a whole.

This online Masterclass is split into 6 major sections:

All about Abundance Blocks

Familiarize yourself with the basics of Abundance Blocks – what they are, where they come from, and which ones could be sabotaging your success.

Learn the methods usually only revealed behind closed doors, and discover exactly how you can tap into your energetic field.

A unique group experience where Christie Marie will use her gift to work on your energy field and enhance your attraction to abundance.

The cost of Abundance Blocks

An eye-opening abundance calculator you can use to see how close (or far) you are from achieving your desired finances.

Get inspired with a few real-life stories from previous participants of this energy clearing session.

Christie Marie in the Hot Seat

Personal growth icon Vishen Lakhiani will ask Christie a series of piercing questions on Abundance Blocks, how to remove them, and whether it’s really possible to influence a person’s energy field through the internet. 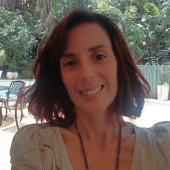 I'm passionate about art and I work as an art dealer and an artist. I also work as a graphic designer and many of the graphics you see on this site is created by me. I'm also a painter and facilitate children's art workshops. Since my union with Haroun Kola, I've been learning about currency trading and also publishing articles on this site as I learn more.

Do you have the brain of a millionaire?