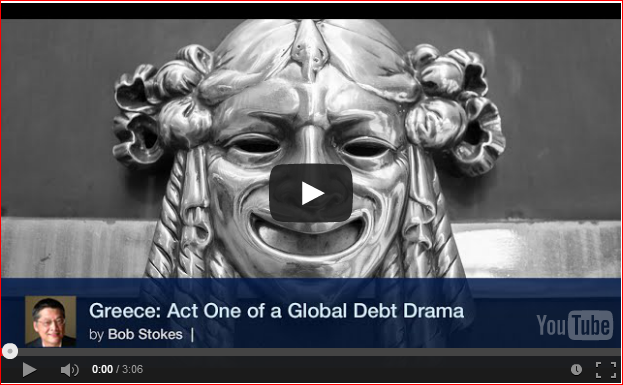 Greece: Act One of a Global Debt Drama

Greek citizens vote “Yes” to kick the can down the road By Elliott Wave International Editor’s note: You’ll find the text version of the story below the video. In December 2009, Greece was encumbered with debt amounting to 113% of GDP (nearly double the Eurozone limit of 60%). In May 2010, Eurozone members and the […]

Greek citizens vote “Yes” to kick the can down the road

Editor’s note: You’ll find the text version of the story below the video.

In December 2009, Greece was encumbered with debt amounting to 113% of GDP (nearly double the Eurozone limit of 60%).

In May 2010, Eurozone members and the IMF agreed to a €110 billion Greek bailout.

The can was kicked down the road.

Yet on July 5, Greek voters loudly said “No!” to the austerity reforms proposed by creditors. In other words, it was a “yes” vote to (once again) kick the financial can down the road.

The austerity package would have included pension cuts and value-added tax increases. Greece’s prime minister wants a less harsh bailout deal, and hopes the “no” vote will provide leverage in negotiations with Eurozone creditors.

But Greece still owes €240 billion to its creditors. Any repayment plan will likely involve sacrifice. What’s more, Greece has suffered a 25% GDP decline since 2010.

The often-kicked “can” may have run out of road.

Willingness to make politically difficult compromises is dwindling in both Greece and among its creditors. Avoiding a financial and economic meltdown in Greece would likely require a level of flexibility that none of the important actors in the latest Greek drama have shown over the past year.

No matter how Europe’s financial authorities respond to Greece’s vote, the fear of default is likely to spread beyond that country’s borders.

The bond market rout that began in Greece last year spread to Portugal, Italy and Spain, starting in March 2015. The next crises could begin in any one of these countries but, ultimately, the credit crunch will turn its sights to much bigger targets. Ten-year yields in France have jumped fourfold since their April 2015 low, and this year’s bond sell-off has likewise sent yields soaring on the once mighty German bund. … Most of Europe’s debt will eventually undergo a broad-based and long-term decline — not because investors will worry about high rates of inflation, but because they will worry about default.

Whether Greece exits the Eurozone or not remains to be seen.

One thing appears certain: the world will soon shift its attention from the Greek debt drama to one that plays out on the global stage.

Europe is in the world spotlight this month, with Greece’s future hanging in the balance. But Greece is just one part of the problem. Enjoy an excerpt from EWI’s Brian Whitmer from the June European Financial Forecast to see just how precarious Europe’s financial situation has become.

This article was syndicated by Elliott Wave International and was originally published under the headline (Video) Greece: Act One of a Global Debt Drama. EWI is the world’s largest market forecasting firm. Its staff of full-time analysts led by Chartered Market Technician Robert Prechter provides 24-hour-a-day market analysis to institutional and private investors around the world.

Why Stock Market Investors Should Expect the Unexp…
U.S. Investors: ‘Watch Europe’. An Article by EWI
See what Elliott waves show next for stocks
Summer of Love for Gold Bulls: How “Quandary” Beca…
Gold: Learn from the Actions of the “Smartest on W…
How to Get a Firm Handle on Gold’s Ups and Downs
Prev Post Cultural India Yoga Escape – 2nd to the 14th November 2015
Next Post Homeless man plays piano beautifully